And what about the power of families? 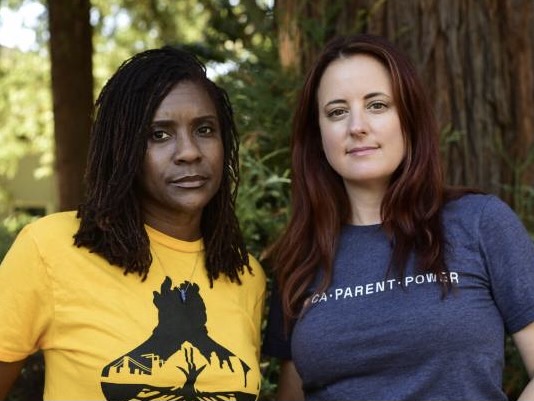 Who has the power to influence Oakland elections? Former Oakland School Board President Jody London, a dues-paying union member, wrote an opinion piece for The East Bay Times where she raises concerns about how the Alameda County Democratic Central Committee selects ”official” Democratic party candidates. “It’s time for those of us who care deeply about democracy and about electing qualified leaders who can guide us through the myriad challenging problems we face to put a stop to the party-insider track,” London writes. (Please see the entire article pasted below.)

What about the power of families who are excluded from the “party-insider track”? A new parent-based coalition formed by the Oakland REACH and CA Parent Power, recently launched an effort to introduce the idea that parents should sit at the collective bargaining table.

At FIA, we will continue to empower parents to get involved and demand our politicians listen.

Interesting food for thought as Election Day on November 8 draws near!

Labor has a stranglehold on the Alameda County Democratic Party

I am a lifelong registered Democrat. I served on the Oakland school board for 12 years. For my day job, every month I pay dues to a public-sector union that recently gained a significant salary increase for its members.

Yet, I have big concerns about the stranglehold that organized labor has on the local Democratic Party leadership and the process of electing leaders in our community.

I am hesitant to write this essay, knowing that it could trigger a torrent of criticism against me. Yet I’m compelled to do this because I am saying what many people are thinking but are not comfortable expressing due to political repercussions.

In September, the Alameda County Democratic Central Committee, a relatively unknown yet highly influential political organization dominated by staunch labor backers, held the final meeting in a process to determine which candidates would be the “official” Democratic Party candidates in the November election. In an ultra-liberal city such as Oakland, this endorsement is often considered a direct route to winning elections. Here’s a sampling of a few of the choices the Democratic Party establishment made.

For Oakland mayor, the committee could have supported Loren Taylor, a smart, pragmatic City Council member who brings strong experience from inside and outside government, listens to his constituents and knows how to be effective. Instead, they endorsed Sheng Thao, also a City Council member, who has focused on cultivating ties with party insiders.

Thao has shown that she waffles on issues such as police funding and does not understand important governmental processes. In a recent East Bay Times interview, Thao demonstrated that she does not know how a bond measure that she voted to put on the ballot would work. Thao is supported by public sector unions, reportedly because she agreed to stay out of an election in 2021 for an open seat in the state Assembly.

For Oakland School Board District 4, the committee could have endorsed Nick Resnick, an experienced teacher and current Oakland Unified parent who now is CEO of a company that develops curriculum. Instead, they endorsed Pecolia Manigo, who spent the summer protesting the school board’s decision that unions opposed to close schools in order to maintain fiscal solvency. Manigo was recorded on video breaking, entering and leading a crowd of parents and students into a locked Parker Elementary School.

For Oakland School Board District 6, the committee could have endorsed Kyra Mungia, a former teacher who works in the mayor’s office, where she facilitated the deployment of computers and internet to tens of thousands of students across the city during the COVID-19 pandemic, is implementing a program to provide housing for Oakland teachers, and has a master’s degree in urban education and a certificate in education finance. Instead, the committee endorsed Valarie Bachelor, a union organizer who has lived in Oakland for two years. She has neither classroom experience nor experience as a parent in the school district.

It’s time for those of us who care deeply about democracy and about electing qualified leaders who can guide us through the myriad challenging problems we face to put a stop to the party-insider track. Talk with your fellow voters. Question the recommendations of the local Democratic Party. Research the candidates’ experience and positions. Access Voters Edge, sponsored by the League of Women Voters, the candidates’ websites and reputable media outlets.

Let’s show the Democratic establishment that we want candidates who are competent and qualified, not mouthpieces for a party line that favors union loyalty over qualifications.

Jody London, a Democrat and union member, represented District 1 on the Oakland School Board from 2009-20.

The original article was published by the East Bay Times on September 1 and can be found here. 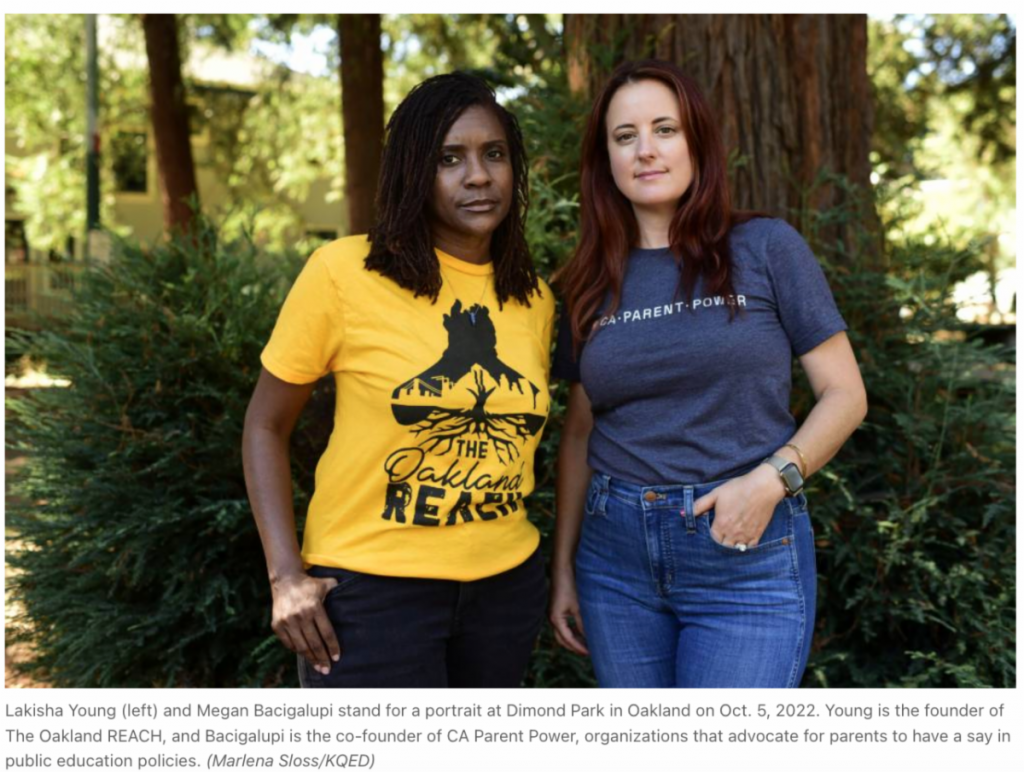 A newly formed coalition of Oakland parents, who say they are fed up with the state of their kids’ public school education, plan to present a resolution Thursday night that could give them a seat at the table during the Oakland Unified School District’s negotiations with the teachers union.

This coalition is made up of two parent groups: CA Parent Power, composed of typically more white and affluent families in Oakland hills schools, and The Oakland REACH, which advocates for Black and Latinx families from the city’s flatlands.

‘When you think about the piss-poor education outcomes of our kids, the parents that we believe need to be most at the table are the parents who want to be at the table in a meaningful way.’  Lakisha Young, founder, The Oakland REACH

“When you think about the piss-poor education outcomes of our kids, the parents that we believe need to be most at the table are the parents who want to be at the table in a meaningful way,” said Lakisha Young, founder of The Oakland REACH and one of the parents calling for the resolution.

The resolution asks the board to allow families a chance for meaningful input on all labor agreement proposals, including collective bargaining agreements (CBAs) and memoranda of understanding.

Those negotiations are just getting underway this week as the current contract ends October 31.

Gary Yee, president of the Oakland Unified School District board, said in an interview he is inclined to put the resolution on the agenda for full board discussion.

Yee said the board should consider the parents’ request after two and a half years of dealing with the COVID-19 pandemic that had them helping teach kids from home and working to keep them safe at school.

“The pandemic awakened a generation of parents to the awful reality that student outcomes in California, and especially in districts like Oakland, have been poor for decades,” said Megan Bacigalupi, a founder of the CA Parent Power group, in an emailed statement.

Both the district and the teachers union would have to agree to parents’ participation in the bargaining process, according to Felix De la Torre, general counsel with the California Public Employment Relations Board. Neither the school district nor the Oakland Education Association has commented on the parents’ proposal yet.

One phase of the negotiating process, called “sunshining,” does allow for public participation. During this period, both the union and the district decide which issues they want to bargain over and disclose those to each other. Under state labor laws, the public has a chance to comment during sunshining.

In a statement, the California School Boards Association called parent participation “a negotiable item and possible if both parties accept that condition. At the same time, no individual party can unilaterally include parents, nor can parents insist on attending negotiations independent of an agreement between the district and union to do so.”

The new parent coalition is pushing for official support from the district to bring informed parents into the sunshining phase of negotiations, claiming there is a lack of transparency, leaving parents in the dark and unable to take advantage of the moments when they can, in fact, legally have a say.

These parents serve different constituents — but are coming together for this common goal.

“Given our partnership in coalition with the families in the hills, they need the bridge created as well,” Young said.

Young started The Oakland REACH in 2016, to empower Black and Latinx parents to advocate for their children. During the pandemic, fearful that flatlands kids were being left behind in distance learning, Young’s group began offering tutoring and classes that showed results.

CA Parent Power, led by Bacigalupi, began in 2020 in response to what some families perceived as a slow response to the reopening of schools during the pandemic, and was largely critical of teachers at the time.

Both groups share a distrust in the ability of the teachers union and the Oakland school district to represent their children’s interests during contract negotiations. They point to a long-term failure of Oakland Unified to improve student reading outcomes — with 46.9% of Oakland students currently reading below grade level, and 70.9% performing below grade level in math.

Keta Brown, another Oakland REACH parent, has looked at the language around the collective bargaining agreement, and she doesn’t see “kids” mentioned.

“You got to make certain that the consumer, which is these babies, are a part of your process and that you are keeping them at the forefront,” said Brown, who lives in an area of East Oakland where neighborhood schools have dismal math and reading scores. (She said she’s lucky she got her daughter into Edna Brewer Middle School, one of the district’s stronger middle schools. She commutes 25 minutes each way to get her child to and from school.)

The Oakland Educators Association has long made the case that, when it negotiates on behalf of teachers to increase pay and improve working conditions, it is in fact advocating for students. Research shows a quality teacher in a classroom is the strongest predictor of student success. OUSD’s strategic plan currently is focused on improving student literacy and teacher quality and diversity.

But some families that have experienced failure over generations, and don’t want to wait any longer for meaningful change, want to better understand and hopefully shape the next three-year contract that they say will affect their kids’ education.

The original article was published by KQED on October 6 and can be found here.