FIA Youth and Parents Make a Difference in National Politics 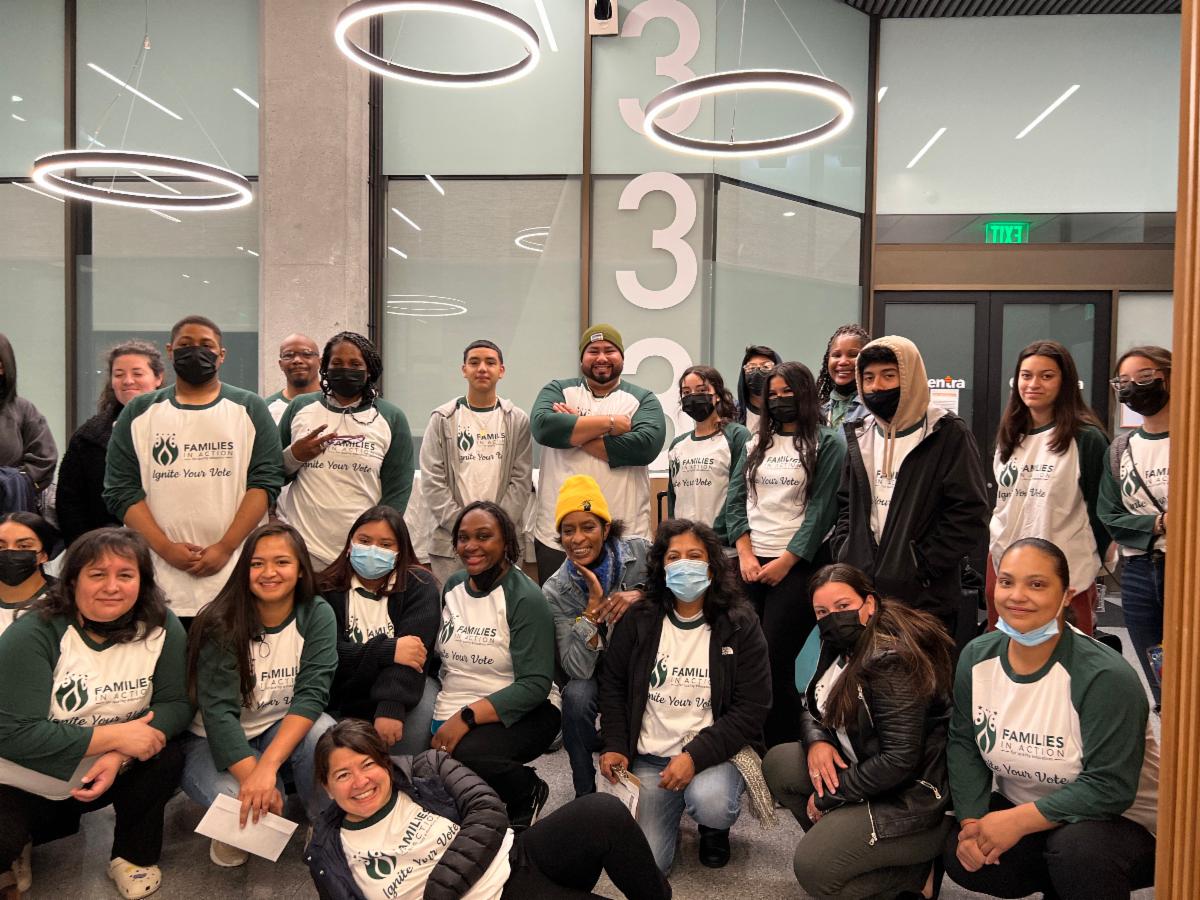 A group of FIA parent and youth leaders went to the White House and the Department of Education (DOE) in Washington, DC to let their voices be heard about the potentially harsh restrictions the federal government is considering placing on charter schools.

They joined over 1,000 students and families from around the country to tell the federal government to “Back Off!”

WASHINGTON — New rules proposed by the Education Department to govern a federal grant program for charter schools are drawing bipartisan backlash and angering parents, who say the Biden administration is seeking to stymie schools that have fallen out of favor with many Democrats but maintain strong support among Black and Latino families.

The proposal would add requirements to the application process for grants from the federal Charter Schools Program, which has doled out billions of dollars over nearly 30 years to help open new charter schools or expand existing ones. It sets tighter restrictions on the schools’ relationships with for-profit entities and encourages more collaboration between charters and the districts they operate in.

The most controversial part of the plan would require grant applicants to prove demand and community support for their schools, examine the effect they would have on neighboring district-run schools, and demonstrate that they would not exacerbate segregation.

Proponents of the plan say it is aimed at increasing accountability for the schools, which promised to be engines of innovation and competition that improve district-run schools. But critics say the rules are onerous and out of touch with the reality of how many charter schools operate: autonomously, and as alternatives to traditional public schools.

Leaders across the charter school community have said the new requirements would quell the growth of such schools, which serve 3.6 million students — 69 percent of them students of color and two-thirds from low-income households — and have waiting lists of millions more.

The rules would “dampen interest in applying for federal funds to launch new schools” and “damage individuals who don’t have resources,” said Nina Rees, the president and chief executive of the National Alliance for Public Charter Schools. The new requirements, she said, would be particularly burdensome for applicants the program was intended for: community members, particularly people of color, who run a single school and do not have enough staff to complete the necessary paperwork or gain access to philanthropists to fund their start-ups.

“Those who would be impacted are the very people I always thought this administration would be fighting for,” Ms. Rees said.

The proposed rules, published in March, drew more than 25,000 public comments last month. The department is reviewing them before publishing a final version in the coming months.

But state leaders, federal lawmakers, charter school operators and parents have continued to mount a pressure campaign to send them back to the drawing board.

On Wednesday, an estimated 1,000 parents and advocates from across the country rallied at the Education Department and the White House in opposition of the rules.

Malachi Armstrong, the father of a kindergartner who attends a charter school in Philadelphia, was among the participants, who held signs, wore T-shirts with protest messages and repeated chants of “back off our schools.” Mr. Armstrong, who said his child attended a charter school in Philadelphia after his underfunded public school shut down, called the proposed rules “senseless.”

“Charter schools aim to be different,” he said. “They know about the hardships — and I’m sure the Department of Education knows — and how bad public schools can be.”

The rally came on the heels of several high-profile denouncements of the proposed rules, including opinion pieces by Michael R. Bloomberg, the philanthropist billionaire and former New York mayor, and Gov. Jared Polis of Colorado, a Democrat. In a letter sent last week, Senators Dianne Feinstein of California, Cory Booker of New Jersey and Michael Bennet of Colorado joined Republicans in asking the department to revise them.

The Biden administration has maintained level funding of $440 million a year for the federal Charter Schools Program, which has helped finance about half of existing charters, providing grants that help cover a range of start-up costs such as furniture and buses.

But in recent years, President Biden has joined the ranks of Democrats who have cooled to charter schools, which are publicly funded but independently operated. The party had long embraced them as a compromise to taxpayer-financed vouchers for private school tuition, which Republicans support.

As a candidate, Mr. Biden declared that he was not “a charter school fan,” which shocked many given that the schools had proliferated under the charter-friendly Obama administration. On the campaign trail, Mr. Biden vowed to cut off for-profit charters — less than 12 percent of the nation’s 7,700 charter schools — from federal funding.

The pledge reflected a longstanding goal of congressional Democrats — led by Rosa DeLauro of Connecticut, the chairwoman of the powerful House Appropriations Committee — who in recent years have seized on loopholes that allowed for-profit management companies to tap federal funding, including from the Charter Schools Program, by contracting with nonprofits to essentially run their day-to-day operations.

The efforts came after a series of scandals in the sector, including a self-dealing scheme and other fraud, and research showing that students in for-profit charter schools performed worse academically than their peers in nonprofit charters.

The proposed rules deliver on Mr. Biden’s promise, requiring that charters receiving federal grants not enter into a contract with a for-profit entity to manage “substantial administrative control” of their operations. That provision has met little opposition, even among charter supporters.

Carol Corbett Burris, the executive director of the Network for Public Education and an ardent critic of charters, said the rules merely addressed the need for more accountability and transparency that should be required for any taxpayer-funded programs. The Network for Public Education, an advocacy group, has chronicled for-profit tactics, charter school scandals and how the federal grant program disbursed millions to schools that never opened or closed.

Ms. Burris’s organization joined dozens of others — including the National Education Association, which is the nation’s largest teachers union, and the Southern Poverty Law Center — in praising the department for “thoughtful and well-reasoned regulations.”

“The department is not trying to hurt anyone,” Ms. Burris said. “What they’re trying to do is clean up a lot of the mess that’s been associated with the program.”

But to many, the rest of the rule — particularly a requirement that charters seeking the grants conduct a “community impact analysis” — reads like an attempt to cement into policy the wish list of critics like Ms. Burris and teachers’ unions to stop charter school growth. They maintain that charters drain traditional public schools of students and resources, especially after districts across the country noted huge enrollment declines during the coronavirus pandemic.

In a Twitter post this week with the hashtag #CharterSchoolsFalling, Randi Weingarten, the president of the American Federation of Teachers, promoted a letter-writing campaign to Congress in support of the new regulations.

That the changes would be proposed before the midterm elections, given Democratic political losses at the hands of frustrated public school parents, was “stunning,” said Frederick M. Hess, the director of education policy studies at the American Enterprise Institute, a conservative-leaning think tank.

“The exact people who suffered when their schools stayed closed in communities hardest hit by the pandemic are communities served by charters,” he said. “For this moment, it’s incomprehensible for anyone who had a lick of political sense.”

Other proponents say the rules are a good-faith effort to ensure that the best charter schools thrive while also addressing disparities that plague traditional public schools, which a vast majority of students attend.

“The high-quality charter schools, in my opinion, do not have anything to worry about,” said Fred A. Jones Jr., the senior director of public policy and advocacy at the Southern Education Foundation. “If the community has demanded a charter school, if they’ve thought through how it will potentially impact the local population, the department has put together parameters to actually guide an equitable process that high-quality charters will be able to abide by.”

But many parents and operators say that while the rules may be principled, they are not practical.

For example, separate provisions that would prioritize applicants that partner with school systems and require applicants to secure a facility before receiving all their funding do not acknowledge the tensions that often exist between charters and district-run schools, said Amanda Johnson, the executive director of Clarksdale Collegiate Public Charter School in Clarksdale, Miss.

Ms. Johnson received $900,000 from the Charter Schools Program to start her school, which opened in 2018 and serves about 450 students in grades K-5. More than 90 percent of them are African-American.

However, her school’s relationship with the local district has been “nonexistent,” Ms. Johnson said. She has tried to purchase two vacant, dilapidated school buildings from the district but has faced canceled meetings and declined offers.

Ms. Johnson said she planned to apply for another federal grant to expand the school to include ninth through 12th grades, and the new rules would be “problematic.”

“It’s just one of those things where if we partnered with them,” she said of the district, “they’d be helping us grow, and that’s where the line gets drawn.”

Parents were particularly perturbed by the Education Department’s requirement that the community impact analysis show an “unmet demand” for charter schools in areas where they sought to operate. One example in the proposed rules was if nearby district-run schools were over-enrolled.

Joe Cantu, an executive director of MindShiftED, a parent advocacy group in San Antonio, said the department’s definition of demand was clearly different than the parents’ in the city’s Latino neighborhoods.

“For them, it’s a capacity issue, but they don’t talk about the fact that schools are failing our kids,” Mr. Cantu said, citing dismal literacy rates in schools in his community. “Why isn’t that an unmet demand?”

The Education Department, which does not typically comment on pending rules, posted a series of statements on Twitter on Wednesday as parents rallied outside its headquarters. The thread tried to clarify what the department called “a few misconceptions.”

It said, for example, that “unmet demand” could be demonstrated through charter school waiting lists. It added that while it prioritizes diverse schools, charter applicants whose student populations reflected racially and socioeconomically segregated communities would still be eligible.

“Our proposed priorities are aimed at making sure students are delivered the highest quality education in excellent public charter schools,” one of the Twitter posts said.

Naomi N. Shelton, the chief executive of the National Charter Collaborative, which supports charter school leaders of color, said she hoped the Education Department listened to the concerns of those who might question that judgment.

“The people who are fighting for this don’t even look like the folks who would be impacted,” Ms. Shelton said. “And the students who come to us are not students they’re even engaging with.”

This article originally appeared in the New York Times on May 13, 2022